OUR STORY
ABOUT KORTRIJK LINEN 04

Linen was first used in the Asian highlands and the Caucasus, and reached Egypt and Europe from there.

Because a mummy wrapped in a linen cloth was discovered in an Egyptian tomb from more than 5000 years ago, it is often said that linen originated in Egypt, but it is now thought that linen was first used in the Asian highlands and the Caucasus, and reached Egypt and Europe from there. 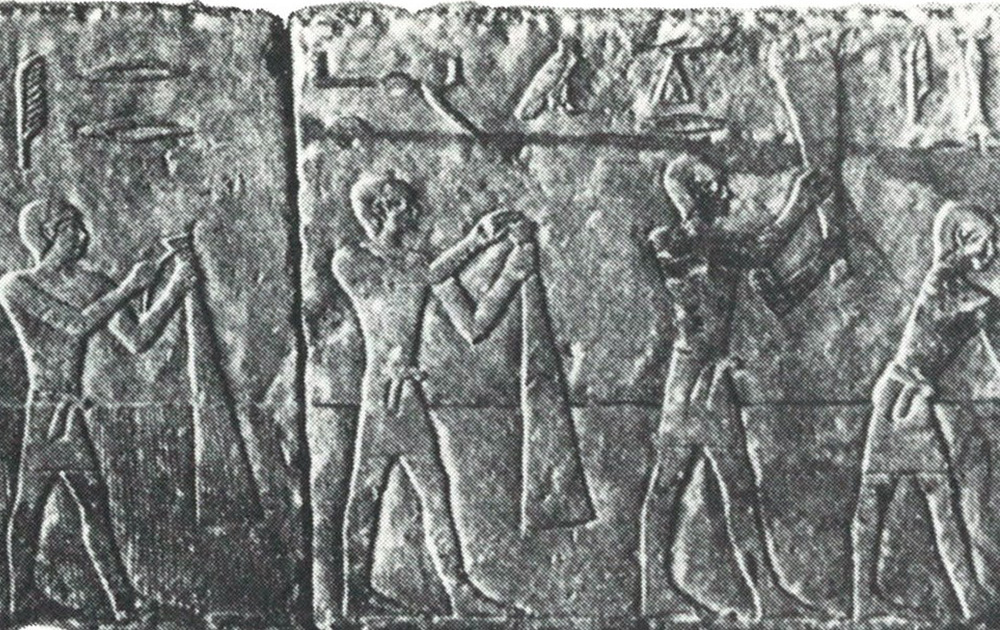 Ancient Egypt around 2,700 BCE. The ﬂax harvest depicted on Hetepheres’grave. 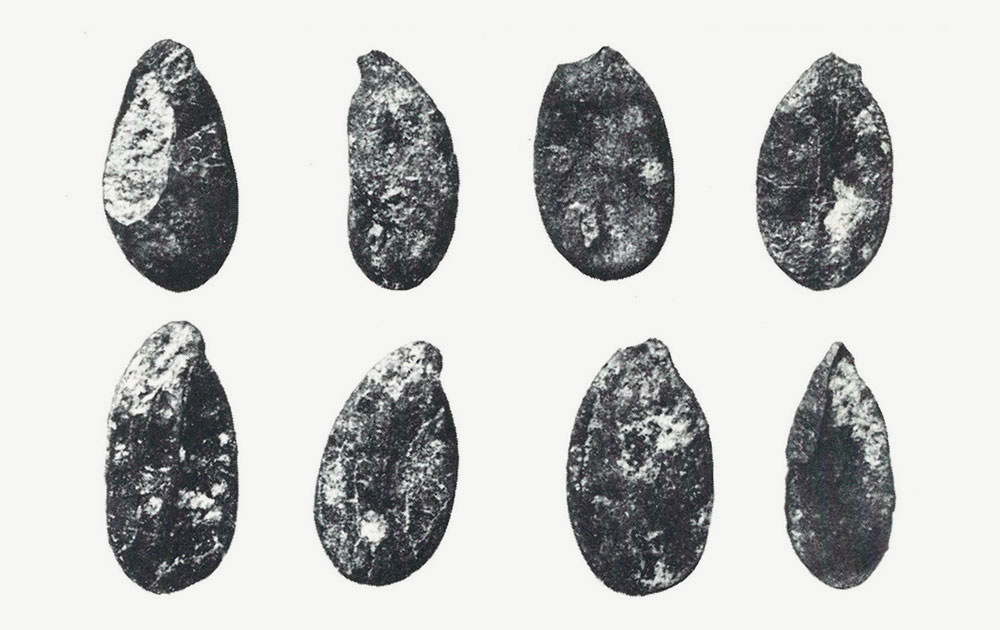 Flax seeds found in Belgium and the Netherlands from around 5000-3000 BCE prove that it was already being cultivated at the time.

Later, the Phoenicians began using the high-quality Egyptian linen for their ship sails and tents when they traveled overseas to trade, and this helped to introduce linen throughout the rest of Europe. In Belgium and the Netherlands, flax seeds have been discovered that date to 5000-3000 BCE.

Flax fibers and tools for producing linen have been unearthed throughout Europe and in Belgium a linen bobbin was found dating to 800-600 BCE, considered to be the oldest known example. In about 57 BCE, when Julius Caesar conquered Belgium, he wrote: “Belgium is a land abundant with ﬂax, the land and climate are perfect for flax, and the people wear beautiful linen garments.” It is thought among linguists that the origin of the word Belgium itself derives from the Celtic belc’h, meaning flax. 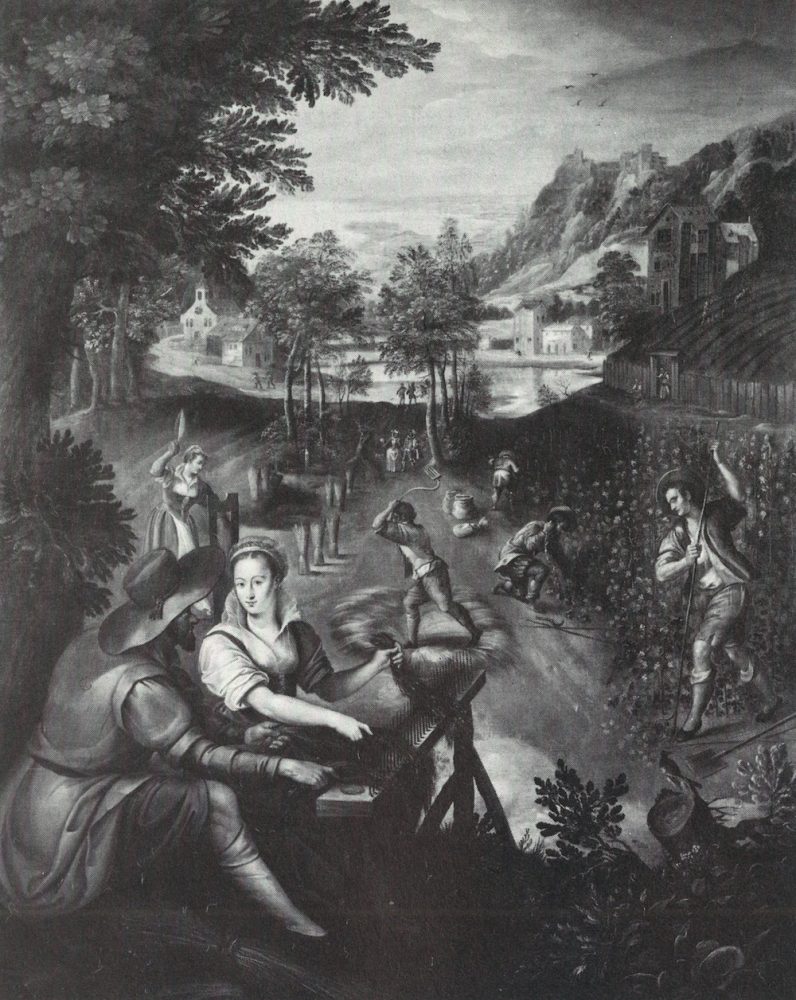 Over the next few centuries, linen production developed into an important industry. When the demand for linen was focused in England and Italy, it was produced primarily in Flanders, France, the Netherlands and Germany.

Flanders was well known for its lace and linen, and Kortrijk in particular was famous for its table linens. Around the year 1350 CE, when France was embroiled in the Hundred Years’ War (1337-1453) and the surrounding countries were plunged into chaos, Kortrijk, thanks to the Leie River, was able to provide a stable supply of linen. Because of this, linen production made a major shift to Flanders during this period. 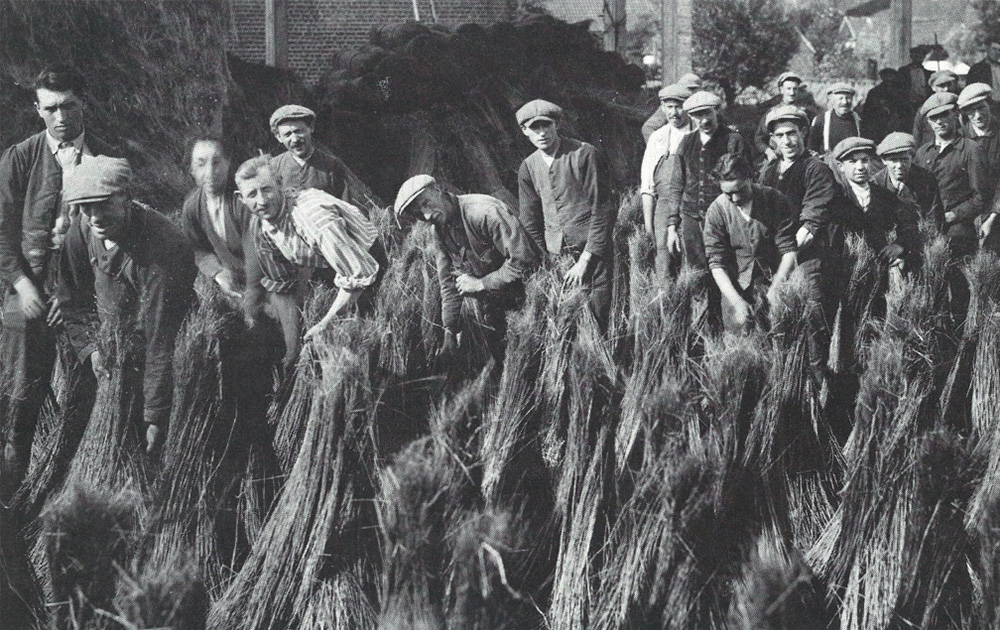 Flax being bundled and dried with the unique process used in Kortrijk. 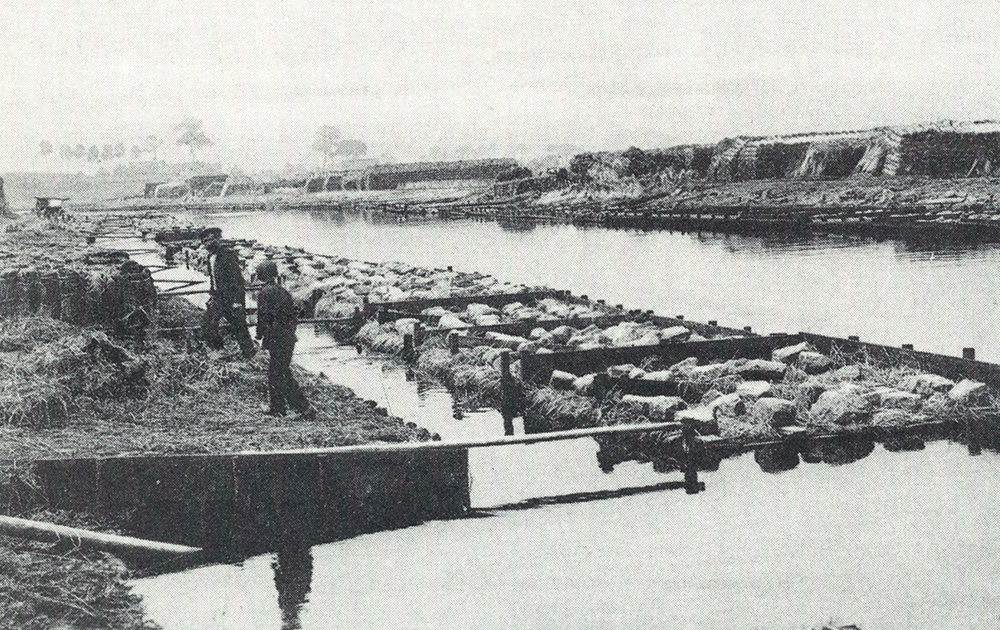 Flax being soaked and retted in the Leie. 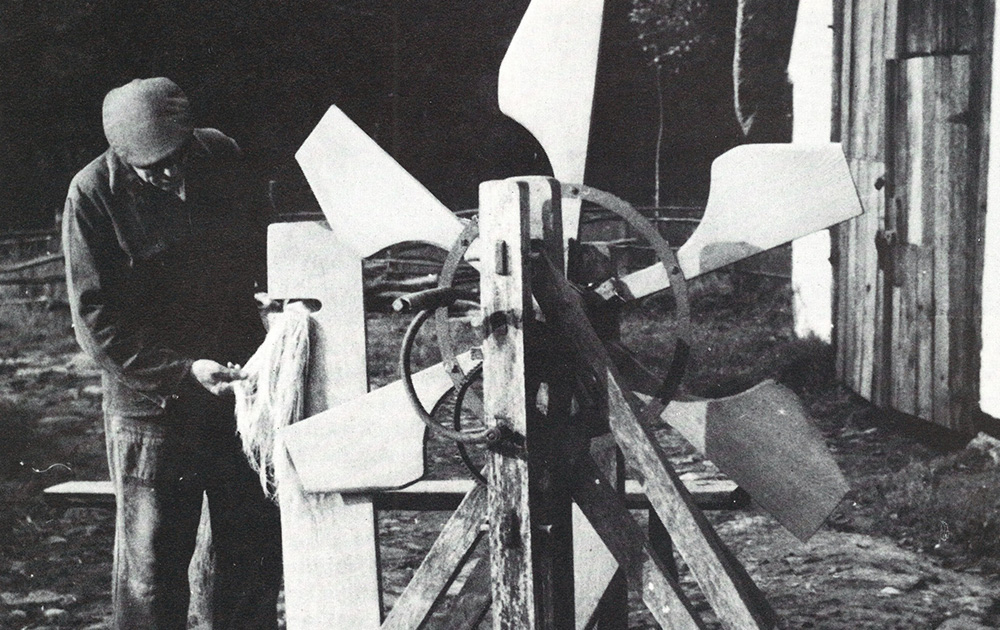 In the dealer’s room the flax is once more sorted, hackled for the last time, put in bunches and packed in bales. 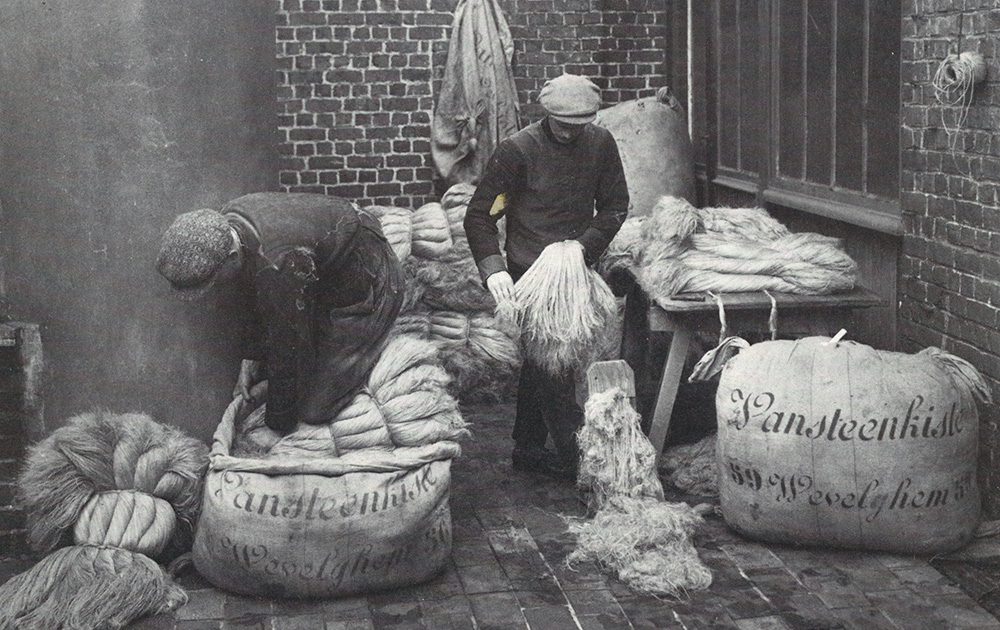 Campine wheel with six blades, driven by a crank and cog wheels.

In the 15th and 16th centuries, when religious wars and political upheavals were destabilizing the surrounding countries, Flanders, and especially Kortrijk, where high quality linen had been produced for centuries already, became famous for their damask; a fabric that requires a high level of technology and expertise for its production. 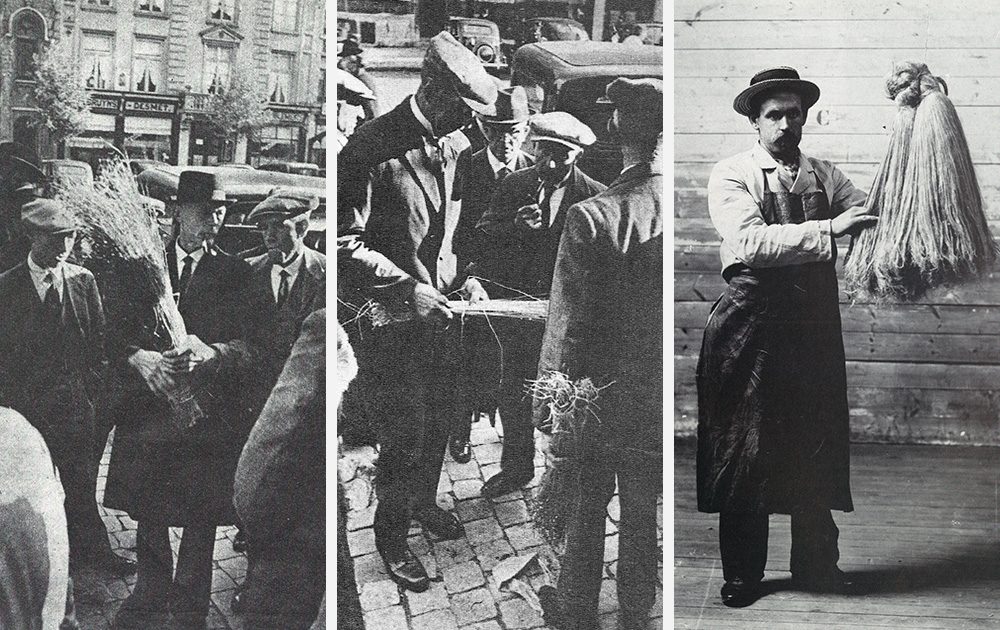 Kortrijk on Monday morning. Harvest samples are gathered and the price is decided upon.

In the 19th century, even with the growing demand for cotton bringing about the gradual decline of the linen production industry, Kortrijk, with the help of the Leie River, was able to continue producing a linen of such a fine, glossy quality, that merchants would travel all the way from England and other countries to purchase it. 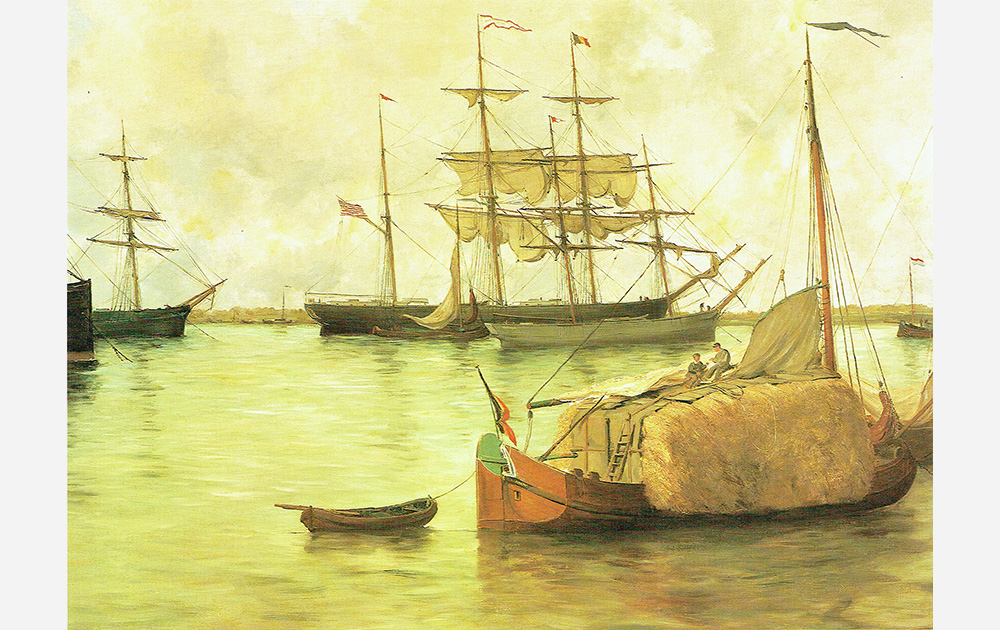 Sailing boats were seen to pass by with heavy loads of flax. Painting by Robert Mols（Antwerpen 1848-aldaar 1903）. 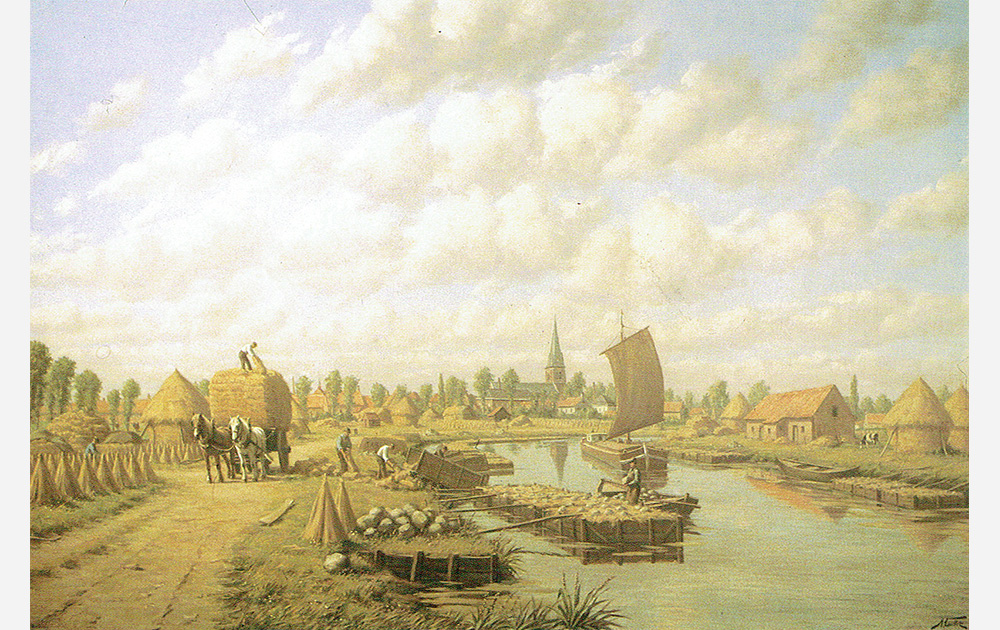 The Leie, also known as the “Golden River,” was well suited to the retting process, wherein the ﬁbers are separated from the rest of the plant by soaking them in the river. Soaking the stalks in river water causes the protein surrounding the fibers to decay, and the exposed fibers to glow golden, hence the river’s name. This is also the source of the term “flaxen haired.”

In the latter half of the 19th century, cheap linen was purchased from Russia and high quality linen was purchased from Flanders. In the 20th century, the buildup of armaments around the world brought on a substantial increase in the demand for flax fiber, due to its relative strength. Linen production declined drastically after World War II, when man-made fibers became prevalent, but through it all Flanders managed to live on at the very center of linen production. 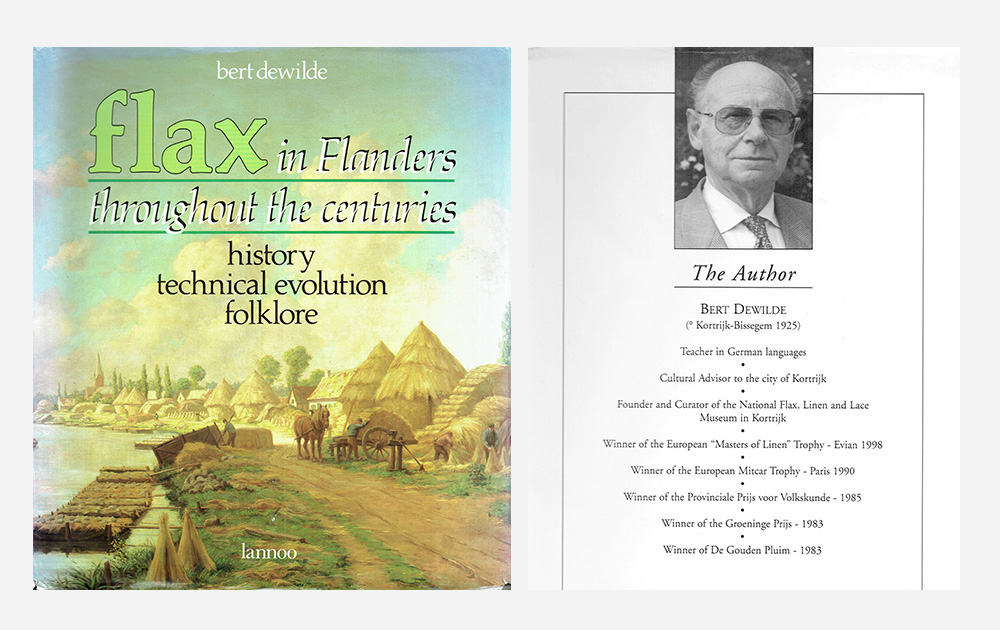 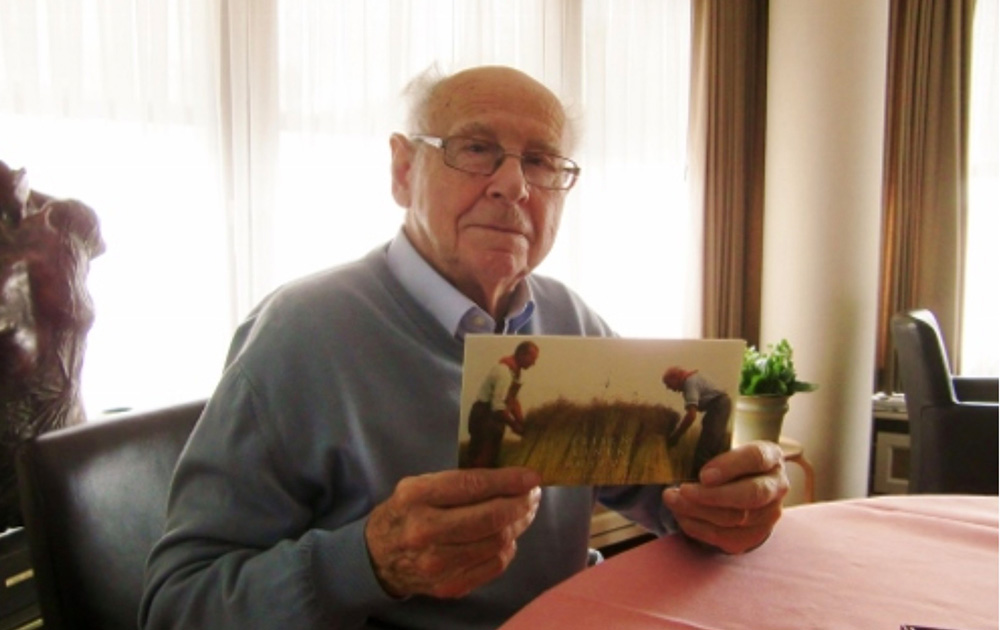 『Flax in Flanders throughout the centuries』（Bert Dewilde）
Flax in Flanders Throughout the Centuries begins with the origins of linen and spans the many centuries of its cultivation. The book focuses primarily on production in the Flanders region and covers topics such as growing methods, the present state of business, and all other particulars pertaining to the cultivation of linen.